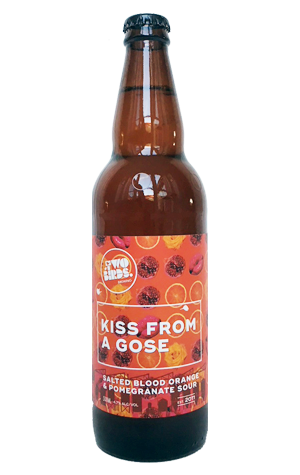 Thanks to the team at Two Birds, consumption of this beer is liable to come complete with the sound of Seal crooning earnestly to a backdrop of the Bat-Signal. Why? Because, after deciding the initial name they had for it didn't cut the mustard, they came up with as many song-related gose puns as they could muster and – "BAY-BAYUH!" – settled upon his Batman Returns ballad.

And what is the beer upon which this title has been bestowed? It's a kettle sour that's been dosed with fresh blood orange and pomegranate juice as well as some Murray River pink salt. And it's the first and last of these (the souring bacteria and the salt) that are the most obvious upfront, with a solid swirl, deep poke of nose into glass and a hearty sniff required to pick up the fruit on the aroma. Instead, the orange and pomegranate go to work on the palate instead, contributing both to the flavour and – "BAY-BAYUH!" – to the beer's lean, refreshing and slightly tangy nature, before its salty, gently sour side returns with the end credits.

Altogether now, you know how it gose... "BAY-BAYUH!"