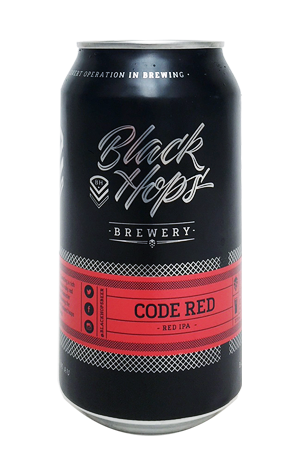 Black Hops release far more beers than anyone living outside their part of the world might be aware. From returning seasonals to one-offs and now small batch brews from their pilot system, there's always a steady stream hitting taps at their brewery home as well as venues around South East Queensland. But it's only every now and then a beer outside the core range makes an appearance in cans. Times like now, when they've given into popular demand for their autumn seasonal, Code Red.

It's a red IPA that, while not particularly red – we're going with chestnut here – delivers the sort of experience you'd expect from a red IPA in spades. It's loaded up with a large enough contingent of American hops to ensure the aromas hit your nose pretty much as soon as the beer hits the bottom of your glass. And, as we often find with such beers, while you'll pick up the expected toffee and toasted malt characters plus citrus and pine from the Citra, Mosaic and Simcoe hops, the melding of specialty malts and punchy hop varieties creates flashes of berry and something quite herbal and liquorice like too. All of which makes for a hearty autumnal beer for those who like to give their palates a workout.