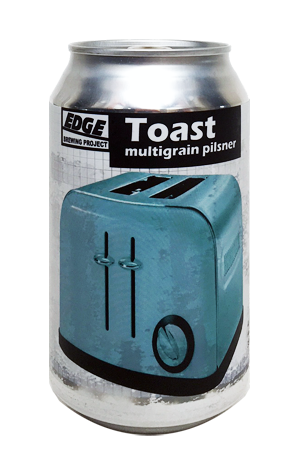 Edge has released plenty of lagers over the years and, in doing so, has attempted to show just how diverse the broad church can be, rather than simply the pale lager/pilsner style that's become shorthand for the style. Toast follows in a lineage of Edge beers that includes Cereal Killer and its recent follow up, Psycho Killer, in that it's one to which Adam Betts has added a basket full of different grains. So, while it's not Toast Ale, it does have many of the ingredients with which you could bake yourself a nice loaf: barley, wheat, oats and rye.

That said, the Aussie hops (Enigma and Ella) have an impact on this "multigrain pilsner" too, layering on gentle tropical aromas that put it in New World lager territory, although without being as punchy as an NZ pilsner, then wrapping things up with a drying, citrus rind like bitterness. In between, there's potent fresh dough and toasted bread like maltiness in another slightly left of centre release from the Melbourne gypsy operation.