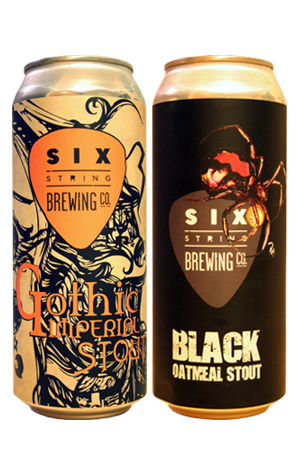 Things have clearly taken a turn at the Six String Brewing Company. Where the warmer months on the Central Coast were once characterised in the main by new and fruity IPAs and lagers, these early parts of the cooler seasons have seen the brewers turn towards the darker side of beer styles – very dark, as it turns out. Indeed, they've gone so dark the first large scale release is an oatmeal stout that’s been called, simply, Black.

Yet if it’s a beer that’s meant to appear menacing – and the spindly Redback spider sitting atop the label certainly suggests so – the reality when drinking it is quite different. Far from being a rich and robust sipper it’s just a good, easy-drinking stout, one where gentle coffee characters, raw chocolate and moderate roastiness and bitterness combine without ever feeling confronting (partly due, you suspect, to the slightly creamy effect of the oatmeal). As it warms you do start to get some fuller, potentially even divisive, characters like liquorice and vegemite coming out, but ultimately it’s a beer you’d be happy to have for company when parked on the sofa on a cool evening.

If Black doesn’t sound like the kind of monster beer you’re searching for, the Gothic Imperial Stout may very well be. If these two beers were siblings it’d be in a Danny Devito / Arnold Schwarzenegger Twins kind of way. In other words: they’re very different. At just under ten percent ABV, Gothic is essentially twice the size but about ten times as rich as the oatmeal stout. This is a sipping beer, a dark mix of sweet treacle, coffee and chocolate where the bitterness and alcohol are on display. Yet those bigger flavours are also cloaked by a caramel coat that sweetens the deal and makes it an altogether moreish proposition that the strength may suggest. Six String’s stouts may not be siblings, but they do make for fine companions.