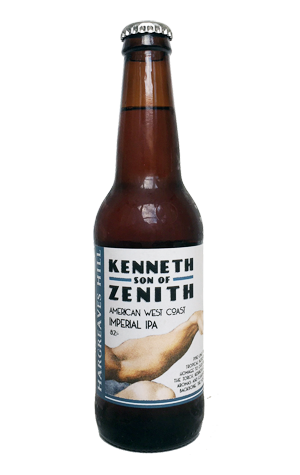 Zenith, the IPA from which, in a roundabout way, Kenneth was spawned may be no more – at least in name. Hargreaves Hill's core range IPA is now simply that: IPA, with Zenith the name consigned to the archives. But his son lives on. Not only that, he's got new clothes; as the brewery's core range has fallen into (clean) line(s), elsewhere there's more fun to be had.

In this case, it's fun involving a spin on the birth of Adam from the Sistine Chapel, while what's inside the new look packaging is pretty much the same. We say "pretty much" as, last time around, there was an overt sweetness that masked some of the beer's hop character. Sure, this is a West Coast style double IPA that's darker and more loaded with specialty malts than many, but the 2018 version feels like a better Kenneth, one where the piney, limey hops have more room to breathe while the malts still deliver an austere balance. Indeed, it's arguably as much a relative of the brewery's Phoenix Imperial Red as the IPA formerly known as Zenith, which is no bad thing.

And good beer stockists around Victoria