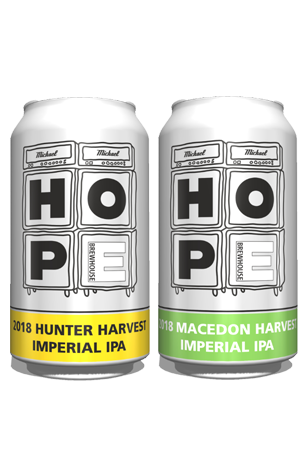 Surrounded by Hunter Valley vineyards, it seems natural that Hope Brewhouse would come under the influence of the fruit of the vine. This makes even more sense given the brewery itself is located at the heart of its own sprawling vineyard. As such, the annual grape harvest in now sees 200 kilograms of Hope Estate chardonnay juice incorporated into the Macedon Harvest and a similar amount of local semillon juice into the Hunter Harvest.

Both imperial IPAs feature the hallmarks of many such beers, with caramel and biscuit malt bodies spiked with citrus and pine hop characters – driven by no less than 12 different hop varieties in the case of the Macedon Harvest – which run parallel to peachy chardonnay characters. For the Hunter Harvest, the influence of the semillon juice lifts the palate with light pear and papaya, combining with eight classic and New World hop varieties. Bitterness for both beers is bright and firm but not overwhelming and the near 10 percent ABV in booze warms throughout.