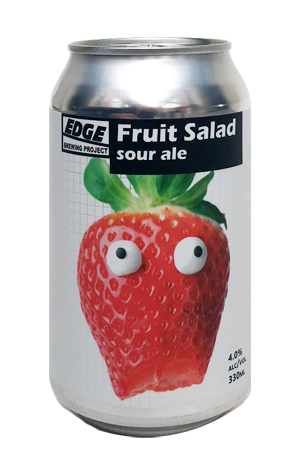 The second of two sours in the recent trio of new releases from Edge is Fruit Salad. It looks like it could be the start of a Fruit Salad series (which may prove to be something of an annoyance for readers with kids of Wiggles-watching age) that will see a collection of different seasonal fruit added to the same base beer.

In this case, while the make up of the half dozen fruit isn't stated, the appearance of a demented strawberry on the can suggests at least one. Whatever is accompanying said berry contributes to a beer that's more complex and confronting than most sours put out by Edge. There's some peachy, berry aromas arising from its hazy, soapy mass but, initially at least, also characters that make beer writers glad for the arrival of such funky beers on the local landscape; here, we're going with rubber gloves, an old sink after it's had water poured through it for the first time in a while, and seaweed. For all the madness on the nose, however, on the palate you find a cleansing, tart freshness with a hint of side palate pucker.