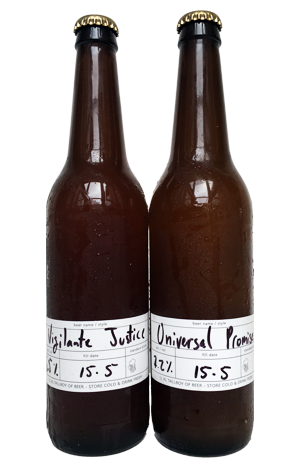 For much of Good Beer Week, Tallboy & Moose has been playing host to Adelaide's Wheaty Brewing Corps. The series of events culminates on Friday with a tap takeover. Among the beers pouring are two collaborations being launched on the night.

One is Vigilante Justice, a beer created via the Wild Blend event we held for 20 Crafty Cabal members, at which they were invited to combine different blends of base beers – a grisette and a Belgian golden sour – with the contents of three barrels displaying varying degrees of funkiness. The resultant blend has filled five kegs and, inspired by a Cabalista's suggestion for a name along the lines of something cultish and Kool Aid related, we came up with Vigilante Justice. The beer itself is a complex, hazy copper affair, combining Cognac soaked oranges with soft farmhouse spices, bready sweetness, a touch of oak and cleansing, slightly puckering acidity. Cabal members who rock up on the night will get their first 150ml pour free!

As for Universal Promise, it's a spin on The Wheaty's excellent rye IPA Non-Corps Promise, with a different yeast and a few other tweaks to take it into hazy IPA territory. The result, as you'd expect, is a cloudy affair awash with tropical fruits – paw paw, passionfruit, grapefruit and the like. It's soft and rounded, although with a bit more prickly bitterness than many of its ilk. Full details of the event here.