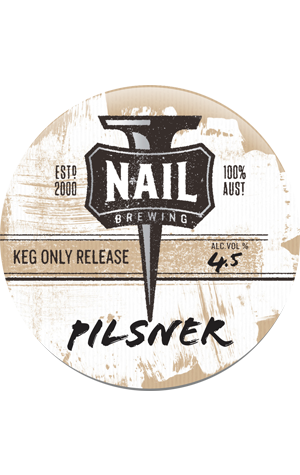 Despite enjoying a critically lauded and oft tumultuous brewing life spanning nearly 20 years, Nail Brewing has only recently found the time to release its first lager. Perhaps last year's AIBA gold for the reduced alcohol MVP (which has since taken out a trophy at the 2018 awards), was a reminder of the joy of well made moderation, given that most of Nail's recent releases had been sitting north of 6 precent ABV. Perhaps, also, it’s taken time for head brewer John Stallwood’s exacting standards to be satisfied before sending a new Nail beer to market.

Some of this speculation may be true and some not but, ultimately, what arrives in the glass is classic Stallwood precision. New Zealand hops Nelson Sauvin and Motueka provide lemon, melon and tropical fruit characters on a well crafted base, as well as the firm bitterness and dry, herbal finish, one that's of greater impact but not dissimilar to some classic European examples.

Initially, New World Pilsner is a limited, draught only release, However, Nail’s recent acronym-favouring nomenclature suggests that any future canned release would see this labelled as NWP. And, given the success of predecessors like VPA and MVP, would likely sit atop its category.

Available on tap and from growler filling retailers in WA