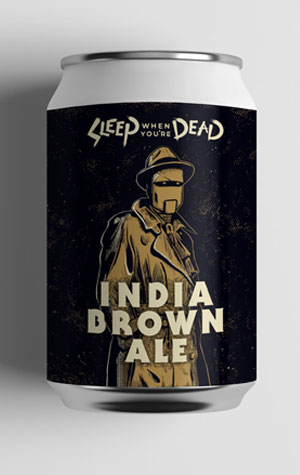 In a similar vein to Stone’s "Enjoy By" series, Ballistic’s "Sleep When You’re Dead" range is all about hoppy beers that don’t get the chance to lose their freshness. They’re packed full of hops, then cold shipped and sold in a hurry. Instead of having a BEST BEFORE date, they’re stamped with a DEAD BY date – only eight weeks after being packaged.

The second in the series is their India Brown Ale, a rich brown brew heavily loaded with Magnum, Centennial, Columbus and the lesser-known Ahtanum, which is responsible for bringing the beer's floral side (apparently geranium, if you’re familiar with the smell and taste of geraniums). The hop aroma is citrusy, but with an intriguing floral or herbaceous edge to it, like lemon myrtle, as well as the more familiar scent of pineapple.

These same flavours find their footing on the palate, accompanied by a touch of peppery spice, much more than the malt… but as the beer warms up, the malt begins to takes hold, bringing in chocolate and plenty of nuttiness, until it reaches room temperature and the hop characters are simply an accompaniment to a damn fine brown ale.

Find it. Drink it fresh. Or else.