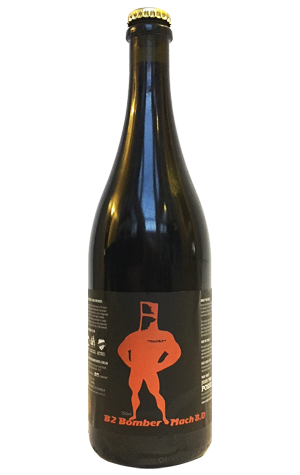 Same Same But Different... Fans of Bridge Road Brewers who've joined them for the launch of every B2 Bomber from 2011 onwards will be aware that, at heart, the beer has been the same since that first flight. Hoppy, dark and roasty, fruity and based upon a Belgian yeast. Is it an imperial Belgian black IPA? Is it a hoppy Belgian imperial stout? Does it matter when it's so warmly welcomed by beer aficionados with a fondness for giving their olfactory system a workout?

Those fans will also know the beer has changed a little every year. But the changes have tended to follow a simple trajectory: more hops, more malt, more booze, more impact. For Mach 8.0, however, the beer has had a new element added: immature spirit drawn from casks at NSW distillery Corowa Whiskey. And, as such, while there's still much that's Same Same, the Different is more pronounced.

First up, the carbonation is much lower than in previous years, which has knock on effects. The hop aroma is more restrained – if you've had two versions of same beer in keg and cask form, the change from previous B2s to this one is like moving from the former to the latter – with the body more velvety too, the stickiness of some past vintages replaced by a smoothness. The fruitiness and soft spices derived from the meeting of punchy hops and and Belgian yeast remains, but joined by a more prominent and rounded espresso character, while to taste there's heaps of rich chocolate and hints of tar and tobacco. If anything, it's more imperial stout like than the previous seven and, like its forebears, a wintry treat to warm your cockles.