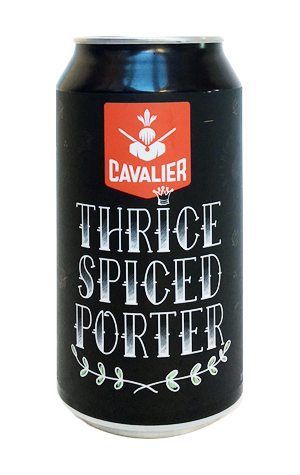 Cavalier's collaborative bar series continues, this time in the company of Melbourne's Three Crowns. And, as with its immediate predecessor with Bar Josephine, it's one that has been canned and comes with a few atypical ingredients. Then it was pineapple and mint; this time around it's "thrice spiced", with that trio of spices all native Aussie varieties: wattleseed, saltbush and pepperberry.

The beer to which they've been added is a porter, one towards the lighter, brown porter end of the scale – at least in terms of appearance. Apparently, the brewing team was taken aback at just how much the beer changed after the spices went to work and you can understand why. Aroma wise, the spices added thricely contribute herbaceous, woody and something we can only describe as bush like characters to the beer, as well as a little fruitiness. On the palate, the wattleseed lends a nuttiness to the toasted, lightly roasted, chocolatey base beer, one which wraps up with a more potent, dry and herbal bitterness than you'd have predicted at first glance.

And other good beer stockists in VIC & QLD