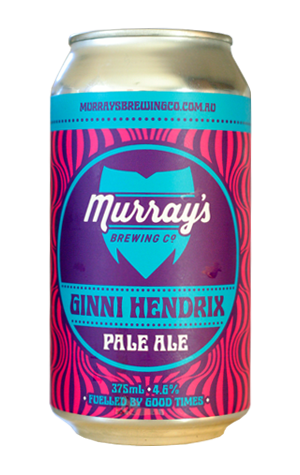 Pretty well everyone knows that Murray’s has been brewing beer for ages, starting at the famous Pub With No Beer in 2006 before moving to their current home in Port Stephens. But, unless you’ve been to said home you might not know they have vineyards on the property and produce their own wine too. And, unless you’ve been there really recently – as in this year – you might not know they’ve completed the trilogy by installing a still to produce their own range of gin and vodka. So, when it came time to coming up with their 2018 GABS beer, Murray’s chose to collaborate with themselves, bringing their oldest and newest creations together in the Ginni Hendrix, a gin (and pun) infused pale ale.

While you get the light aromatic qualities of the gin botanicals coming through, the addition of the spirit means it’s not your regular pale ale – the structure seems like it’s been altered to become a bit leaner, almost as if the spirit has snuck up Scooby Doo-style and spooked away some of the hops. Indeed, without a really big fruity or bitter hop punch the beer almost feels as though it’s got the more slender body of a lager. As it warms, you do get a touch more hop character coming through, just not in threatening amounts, before it finishes light and dry.

In more than a decade of brewing, the Murray’s team has never been scared to try out experimental ideas so, with more toys to play with at the brewery now, it wouldn’t be surprising to see more fusion brews of this kind in future.