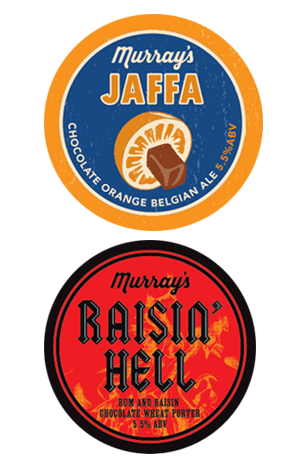 To kick off the 2018 edition of their annual dark beer month, during which different ten dark beers will pour from the brewery’s taps, Murray’s released a coupe of typically off-centre new beers that seem to stir thoughts of pudding.

The first is the Jaffa, a Chocolate Orange Belgian Ale. They say the beer is based on a blend of Belgian styles, one where chocolate wheat is used to give a dark colour and aroma of mocha while the yeast provides “subtle banana, clove and hints of bubble gum”. To give it the requisite jaffa candy twist they added orange peel which they say gives “a tart citrus finish, balanced out by a residual malt character and low hop bitterness.”

Its companion is Raisin' Hell, a Rum and Raisin Chocolate Wheat Porter. The colour and malt character is derived from chocolate wheat malt, a grain they chose in order to avoid a high level of roasted bitterness that can be associated with traditional porters. Once done, they conditioned the beer on roasted cacao nibs in order to extract “intense chocolate” characters while the sweetness of the malt also provides a “subtle rum and raisin character”.

Both beers are draught only at the brewery, pouring alongside a special nitro edition of their Dark Knight Porter.