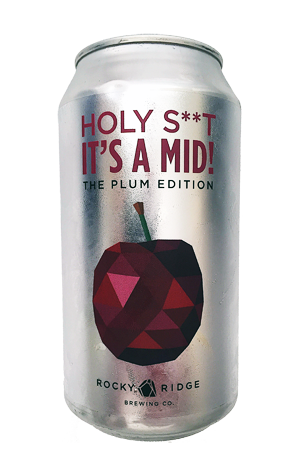 Continuing his noble work in saving fruit from landfill, Rocky Ridge’s Hamish Coates and his expanding team have given 300 kilograms of plums a new lease on life in this iteration of the brewery's fruit gose series.

Salty aromas lead the way on the palate with Holy S**t, It’s A Mid! – The Plum Edition showing similar restraint on the fruit front as the previous Kiwi edition. The refreshment of the base beer holds the spotlight with the plum characters providing tart acidity underscored by a fruity sweetness and subtle flavour. The full mouthfeel aided by salt additions is reinforced by the high pectin levels in the plums, which have contributed to a haze that leaves the beer resembling apricot juice in the glass.

Discussing the continuing series, Hamish said that, despite growing up on the family farm, he’s been amazed at the diversity of fruit production in the South West of WA, indicating the next edition may be more exotic than those to date.

And for a limited time at other good WA retailers.