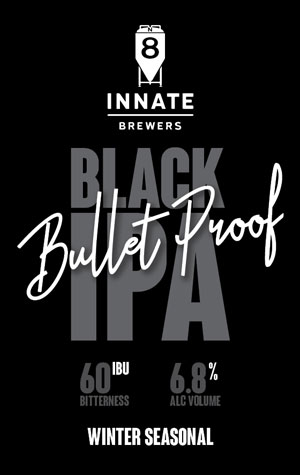 Bulletproof. It’s a big call for the first beer from the newly supersized Innate brew kit but one that implies confidence in its expansion. This decision is reinforced by releasing a Black IPA when taps around the nation swell with lurid haze, not that Innate have been shy when it comes to embracing turbidity; more, it’s a signal of intent: we know the market but will chart our own path, thank you very much.

Sampling Bulletproof at the brewery’s home city, Fremantle, while a squally winter storm descends through the historic heart, it's apparent this may prove a smart move. Short of opting for a massive imperial stout, as the comparatively sessionable 6.8 percent ABV Bulletproof warms, allowing the Bravo, Amarillo and Eureka hops to go to work against a background of dark chocolate and light earthy undertones, it perfectly satisfies the mood. Meanwhile, the consistent pine-citrus bitterness keeps proceedings as fresh as the wind whipping the empty streets.