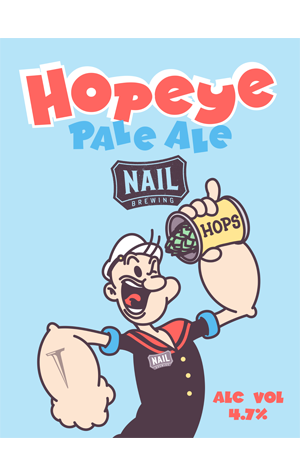 Early success for Nail Brewing was driven by Nail Ale, an Australian pale ale more in the Coopers mould than the pales of today that would dominate awards. Now, as the brewery heads towards 20 years in the game, it appears founder John Stallwood feels it's time to put out a modern spin on the ever-widening pale ale category; enter Hopeye.

While Nail Ale is anchored to legacy of Pride of Ringwood hops, Hopeye instead ramps up the flavour with Mosaic – the first time the brewery has used the American hop that has proven hugely popular since first hitting these shores just a few years ago. The result is a very contemporary beer, albeit one in which the initial assertive bitterness come as a surprise. That said, while it's punchy, the bitterness isn’t out of balance, it’s just tough.

This equipoise† is partly the result of Mosaic’s orchard of nectarine, peach, melon and subdued grapefruit and its balancing malt sweetness. As with the brewery's recent New World Pilsner, the dry finish creates a moresish sessionability, turning Hopeye into something you’d order by the jugs at your local pub.

And at select WA and East Coast venues