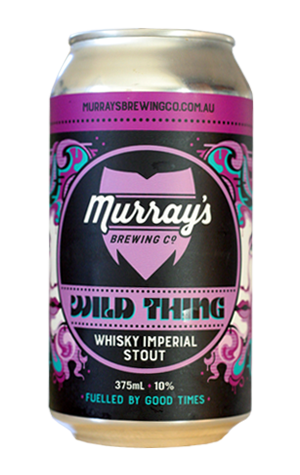 If you were attempting to establish some perspective on how much the Australian beer scene has shifted over the past decade, one of the clearest views may be seen by squinting through the impenetrable black prism of Murray’s Wild Thing.

While reserving the right to be corrected, a rough calculation suggests that 2018 represents the tenth year the Port Stephens brewery has released its iconic imperial stout. Such milestones can be dismissed as being no big deal – just another big beer, you might say, justifiably pointing to the fact that a decent beer shop now stocks more imperial stouts than you could reasonably consume in several sittings. But now is not then. How many high flying breweries of today didn’t exist back in 2008? And of the few that were around, how many were making ten percent ABV monsters? Fewer, if any. For that reason alone – especially for those drinkers that were around or caught onto it in those early years – Wild Thing will forever be a special beer.

Pleasingly, it seems to have lost little of its cult status, even experiencing something of a resurgence in interest in recent years thanks to Murray’s annual Dark Beer Month which unleashes a surge of dark beers. That has included several Wild Thing variants – chocolate, coffee and vanilla editions – and this year has brought another sibling.

Wild Thing Whisky was conditioned in the company of whisky barrel staves and these have imparted their character in a way that’s distinct without being overbearing. Whether you personally believe there’s either not enough or too much peaty/smokey character will be a matter of discussion between you and your taste buds, but if the aim was to create a beer with impact the brewers have hit the target. It pours thick and black, although doesn't necessarily present as weightily on the palate, and serves up a potent mix of bitter dark chocolate, sharp roasted and fortified characters.

Ten years in, Wild Thing remains as big and bold as ever. Would it really be winter without it?