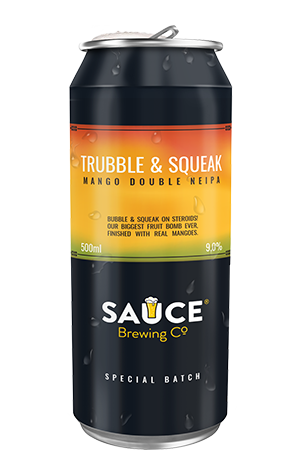 Want to know what it tastes like when a New England IPA gets raised on a diet of mango and steroids? For their 2018 GABS entry, Sauce took the recipe for their almost permanent NEIPA, Bubble & Squeak, to the operating table and turned it into a murky monster: Trubble & Squeak.

NEIPAs are fruity. This is like standing in a cricket net, open mouthed and without a bat, being pummelled by a bowling machine loaded with mangoes. NEIPAs are juicy. This is dense, a sweet and viscous syrup. Bitterness? Not so much. It’s strong though – nine percent ABV. Problem for you is it’s smooth and moreish. Knock a couple of these off too quickly and your day is done.

It won’t take more than a few gulps to understand why it made a mark with punters at the GABS festival. They put the leftover liquid into cans and sold it out before it left the brewery. What’s in the wild is all that’s left. If you’re into big NEIPAs, Trubble is paradise. You just gotta find it.