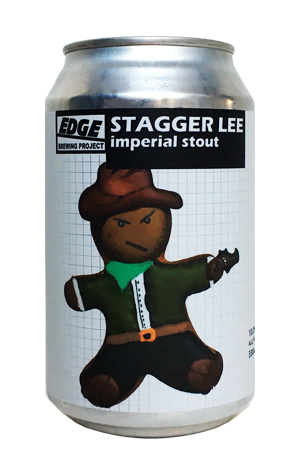 Nick Cave's spin on old folk tune Stagger Lee is many things: a highlight of his live shows; one of the more radical covers you'll come across; one of the most darkly wicked songs even he's put out across his decades of being darkly wicked. It's also the name of Edge's imperial stout, so chosen because it was the sort of reference – a "bad motherfucker" – that fitted the biggest, baddest beer in their lineup. Well, at least until they released magnums of a barrel aged version that also took the title of an Aussie song: Don't Fuck With Joe.

The winter 2018 release continues Edge's transition to cans, cans that come with a rather cute image of a gingerbread cookie cowboy on them. But don't go thinking that means the beer has softened. It's thick and chewy, toasty with a long, lingering roasted finish, black as Stagger Lee's soul, and possessing flashes of the leather from his boots and the tobacco he'd be chewing as he fills Billy full of lead. That said, there's no need to crawl over anything to get your hands on it; you just need to track it down and hand over a few dollars.