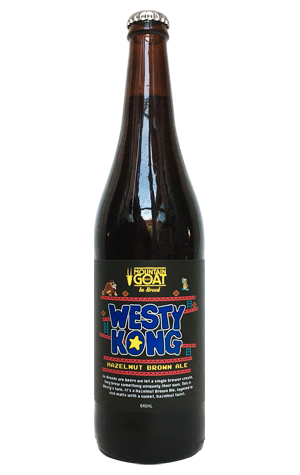 Given his role at Mountain Goat involves being both brewer and barrel man, you'd think Craig "Westy" Westwood might have opted for something barrel aged for his latest entry in the brewery's In Breed series (so called as they're created by people that work there). But, aside from the barrels that appear on the Donkey Kong† aping labels, they are nowhere to be seen. Instead, he's returned to the realm of brown ales, as he did for his first In Breed four years ago.

Here, however, he has given the beer a little something extra in the form of hazelnut meal, turning it into a hazelnut brown ale. There's a fair selection of specialty malt in there too and alcohol content that sits at 6.4 percent. If that has you prepared for something sweet, rich and wantonly nutty, think again, however, as he's taken all the constituent parts and put them together in such a way that everything is served in subtle measures, creating a straight down the line, faintly nutty brown ale light enough on its feet to make barrel-hopping a cinch

† We originally wrote King Kong. It had been a long week...!

Tapped at the brewery June 29