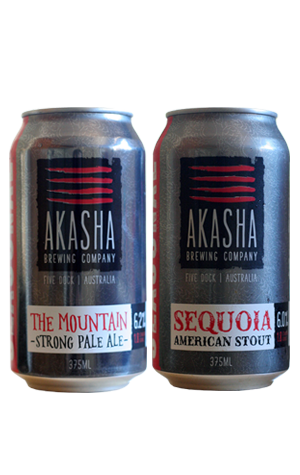 Ever found yourself standing at a bar or bottleshop stuck in an infinite loop of indecision: am I in the mood for a pale ale or IPA? Akasha figured the conundrum presented a legitimate gap in the market so they’ve decided to plug it with The Mountain, a strong pale ale.

This is every bit an Akasha beer. In other words, it’s clean and hoppy as hell. Relatively light in colour, they’ve worked their customary magic on the malt front to give it the kind of strong base which can stand up to a cavalcade of Simcoe, Amarillo and Centennial hops. This gives it plenty of oomph, fills it with pine and a pleasing bitterness. At 6.2 percent ABV it does sit comfortably in that slot between styles (one previously occupied by their XPA) though perhaps not exactly halfway between – you could reasonably argue that this beer is closer to an IPA. Then again, arguments tend to have two sides. Either way, this is solid as a rock. Or mountain.

Similarly large in stature is Sequoia, Akasha’s American stout. It brings to mind the brewery’s 2017 American Stout (minus the arboreal reference) in that it’s not a traditional stout but a very hoppy one. So you’ll find plenty of roast, chocolate, espresso and liquorice character from the malt while the hops add lots of citrus plus a bit of spice and a little floral character. For all that, it’s got a most pleasant creamy feeling in your mouth, which satisfies before allowing the bitterness to finish things off.