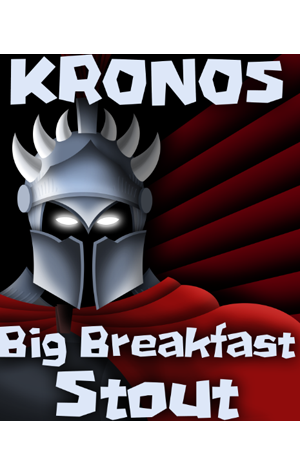 Kronos is the king of the Titans, father of Zeus and a bunch of other gods, and bigger and badder than the lot of them. He overthrew his father, ate his children and still had time to have a beer named after him.

It’s labelled a "big breakfast stout", but this monster would suffice for breakfast, lunch or dinner. The head is a dense, tan foam strong enough to form the foundations of the earth. At 79 EBC, Kronos is the blackest of the black, allowing no light to pass through (which seems fitting, since Kronos was eventually imprisoned in Tartarus, the dark abyss). It’s thick and full in the mouth, with deep chocolate flavours.

While you can certainly taste the family resemblance between Hades and Kronos, there isn’t the same sweetness found in the brewery's smaller stout. Rather, the chocolate notes are powerful and roasty, spreading their bitterness far and wide. This beer is a mastery of malt – the toasted and biscuit malt base support the crowning glory of the crystal and chocolate, both from UK maltsters Simpsons – yet loaded with enough hops to keep the flavours balanced but not so many that they dominate.

As the flavours linger and a boozy warmth enters your chest, you may find yourself wondering how much of this limited release you could safely drink before it disappears. But don’t fear – Kronos is set to be an annual release. This Titan will return.

Kronos is being launched to mark six months of Helios – or their "half anniversary" – so they're offering some specials at the brewery over the launch weekend: