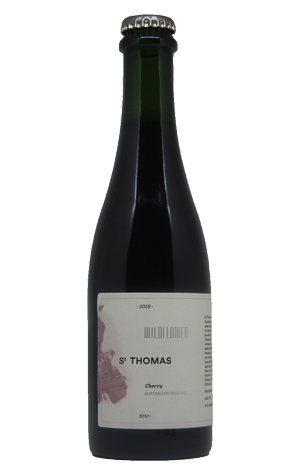 Before Wildflower opened its doors, and in much of the subsequent time since, the steadfast focus for the Marrickville blender was on the progression and development of their core beers, Gold and Amber. These are the bread and butter of the business. Their babies. But more babies have arrived – real ones. Co-founders Topher and Chris have a few between them and for each birthday they were determined to release a new fruit beer, in celebration. But when your beers take a long time to produce, that necessitates a bit of prior planning.

For example, let’s say a young boy, Thomas, has birthday in July but it takes six months to make a beer. You need to get that thing going ages ago, like back in January. So you look at what’s in season then – it’s summer so that’s a lot of stuff, but you settle on cherries. 200 kilograms of the things, all needing to be de-stemmed. It takes three days. You pick out a bunch of barrels that have already been ageing a base Amber ale for up to ten months, then rack ‘em over that mountain of cherries. That sits there for nearly three months, the yeast cultures from the beer and fruit eating up all that sugary goodness. It’s like some super concentrate, so you get things back in balance by back blending in a younger barrel of Amber. Then you stick it in bottles for another three months – maybe a little more. But when July rolls around and it’s time to say “Happy Birthday Thomas!”, he’s got his own beer. And what a damn fine beer to have your name attached to. A ravishing deep red colour, tart, dry, refreshing, impeccably balanced and with none of that awful artificial cherry syrup sweetness – just a full and rich fruit feeling.

Wildflower’s core beers may be their real pride and joy, but with each successive release in the ‘Saint’ series these fruits beers are threatening to steal the show.