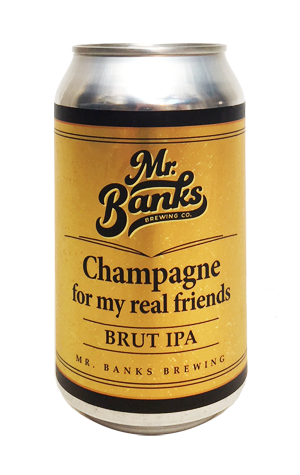 In its short existence to date, Mr Banks has shown a willingness to take on new trends in beer, particularly when it comes to IPA. The Seaford brewery has put out well received NEIPAs and now has trained its sights on the latest IPA craze to sweep the nation: Brut IPA. It's a style also referred to as Champagne IPA and you certainly know it when faced by these cans, wrapped in golden bubbles and declaring the contents as "Champagne for my real friends".

Given the Crafty budget doesn't warrant a trip to San Fran to check out the original beer that sparked the Bruts, we're not 100 percent sure how the definitive beer of the style should present but we do know it's supposed to be pale as anything, something that's achieved here (albeit with a haze that hints at the heavy late hopping) in tandem with a towering white head.

Maybe it was a trick of the mind (expectations; the look of the can) but we figured there had to be some Aussie or Kiwi hops helping create the white wine like elements of the aroma (Enigma was first on our list of suspects) but brewer Chris Farmer tells us there's nothing but US grown Idaho 7, Ekuanot and Citra in there. They deliver some lean tropical characters too in a beer that's soft on the palate, comes with a gentle bitterness and finishes pretty dry.

Two For One Beers at Mr Banks