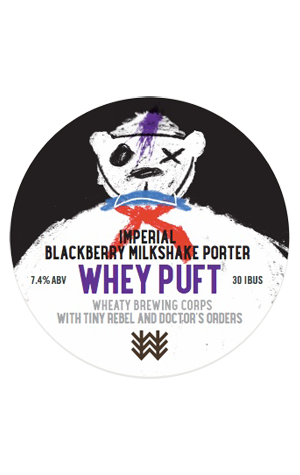 Another successful Good Beer Wheaty has delivered yet another inventive collaboration at the expanding Adelaide brewpubs. This time Darren from Doctor's Orders returned while Gaz from Welsh powerhouse Tiny Rebel made his Wheaty debut. Darren is known for throwing weird ingredients in beer and Tiny Rebel have a very popular beer called Stay Puft, a marshmallow porter and the new beer was sparked from a combination of the two.

Whey Puft is an imperial blackberry milkshake porter, albeit without the addition of marshmallows. Well, nearly. The Doc is a sneaky man and, when the brew crew wasn’t watching, managed to slip a couple of them into the kettle. Wheaty leader Jade, fearing the mess they could have made, was grateful he added no more. Aside from the two invaders, the beer was created from ale, chocolate, roasted and Munich malts, flaked oats and wheat, plus blackberries, vanilla, lactose, dextrose and Magnum hops.

It's a combo that fills your glass with a jet black liquid topped by a healthy brown head. Sweet, milky cream and vanilla dominate the aromas, mixed in with a touch of roast, coffee and chocolate. The most noticeable attribute on the first sip is the thick and creamy body – it really is just like a milkshake. There is some sweetness balanced by a decadent roastiness and the slightest touch of tartness from the blackberries. As the beer warms, the sweetness takes a back seat and the blackberries creep in just a little more before, right at the very end of the glass, the very last sip, those two marshmallows that Doc added show up. Or maybe that's just a psychological thing...