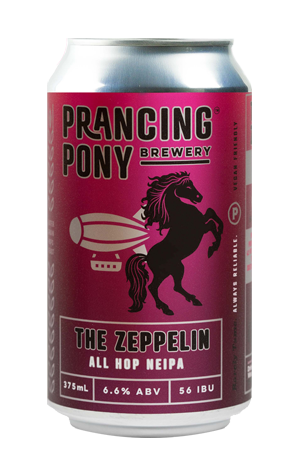 After upgrading their brewhouse to one that is no longer a fire-fired upscale version of brewer Frank Samson's old homebrew kit, Prancing Pony switched their "Fire Brewed" tag to "Long Flavour". Here, they add another pairing, with this beer debuted at the 2018 Beer & BBQ Fests declared an "All Hop" NEIPA. And, while we're pretty sure they haven't put all the hops in the world into it (four new varieties have been released globally in the time it's taken you to get this far), they've clearly put in plenty.

Arising from the murky depths of this intriguingly labelled beer (complete with moustachioed cellist in front of a pink, Zeppelin-heavy backdrop) – UPDATE: As of February 2020, the beer is now in cans and the core range and the cellist is no more – we picked up aromas of rose, Juicy Fruit gum and berries, as well as the more typical citrus stylings of the NEIPA. It's full and sticky, with its citrusy sweetness just about kept airborne, like the titular blimp, by a slow-rising, perfume like bitterness.

And other independent retailers in SA, VIC, NSW & QLD