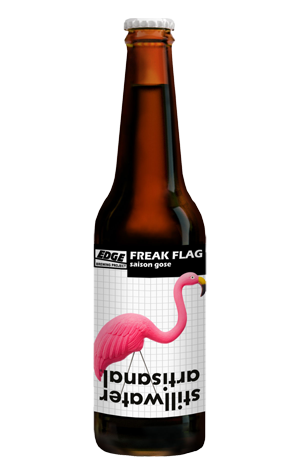 One of the advantages of being both importer and brewer is the opportunities that present themselves to create collaborations. The ExperienceIT/Nomad Brewing team likes to take full advantage, as has Adam Betts of Northdown, Craft Beer/Edge Brewing Project over the years.

So, when Brian Strumke from Stillwater Artisanal was back in Melbourne for Good Beer Week, he and Adam headed to Red Duck in Ballarat to make use of the brewery there for another co-brew. It's one that appears to combine a couple of their favoured styles; while Stillwater has broadened its brewing horizons significantly over the years, it started out with a keen focus on saisons and other farmhouse style ales, while Edge tends to focus on stouts, lagers and gentle sours. Here, the idea was to combine two of those – saison and gose – as one.

You'd put Freak Flag (so called as Brian had always wanted to give a beer that name, with the flamingo a nod to his hometown of Baltimore) more in gose territory. It's a beer that's very cloudy, like a traditional lemonade, with a saltiness, chalkiness, some doughy bread and lactic characters on the nose. Lemon joins in on the palate, where there's a prickly carbonation working in tandem with its gentle acidity to add a refreshing finish to what, at just 4 percent ABV, is very much in easy-going "session sour" territory.