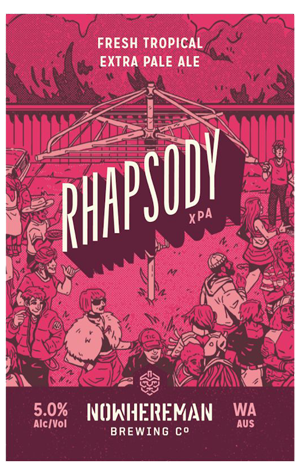 New brewer Eddie Still’s first beer for the inner Perth brewery leaves West Leederville’s urban grit behind for more tropical climes. Perhaps it's the illusion of summer during the slow crawl out of the cooler months but, if Rhapsody’s opening weekend is anything to go by, this looks set to become Nowhereman’s best-selling beer.

The light orange hue in the glass the echoes the sunshine in glass that waits as tropical aromas, notably passionfruit, and some citrus work in concert with sweet malts on the palate. The full flavoured yet lean body supports tight carbonation that amplifies the firm bitterness, with Rhapsody’s length of palate befitting that of an ultra-marathon running brewer. All of which is resolved by a very dry, moreish coda.

UPDATE: It was a case of first in, best dressed for Eddie's debut beer as it soon transitioned to a permanent pour.