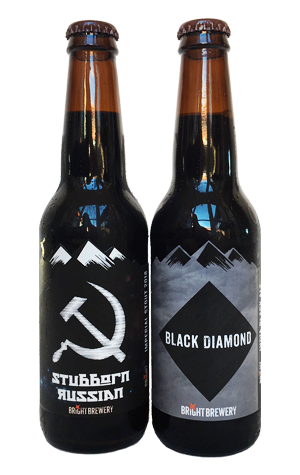 There appears to have been a particularly large delivery of roasted and other specialty malts to an address in Bright in recent months as the brewery has put together no less than half a dozen dark beers of varying ilks. Four of them are only available at the venue or via their Mash Club (more on them later), but two are available more widely.

One is the latest entry in their annual Stubborn Russian series of imperial stouts that's moved around stylistically over the years although is settled into something of a groove these days, a groove that sees Bright Chocolate brought into the mix. And chocolate is very much to the fore in the 2018 release, jet black, sticky and dessert like. Imagine something like a chewy, gooey chocolate brownie or a rich sauce you'd pour over a bowl of ice cream – but in boozy, liquid form – and you're on the right track.

As for Black Diamond, it's a black IPA that, if we're going to split hairs, could as easily be tagged a hoppy porter as there's still a good dose of roasted malt and dark cocoa to be found alongside the hops. There's a creaminess to the body, a bitterness that feels more roasty than hop derived and an earthiness too.

The other four dark beers are the easy-drinking, relatively light-bodied, slightly dry and chocolaty Schwartzbier, the lively GABS beer BAM-BA-LAM dark saison layered with lavender, ginger and spice that are the beer's defining character, a Dunkelweizen that leans more towards the sweeter, dark caramel Dunkel side than the weizen, and a satisfyingly full and rounded Smoked Belgian Porter created at one of the brewery's Brew For A Day session.