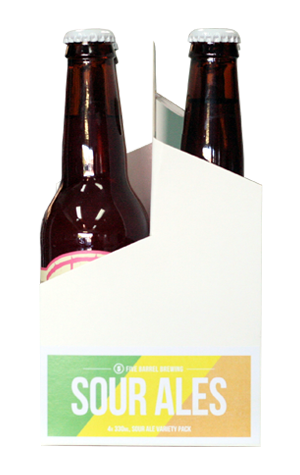 There are four-in-one additional reasons to poke your head into the Five Barrel tap room as the Wollongong brewery has ventured for the first time into the world of exploratory variety packs. And, as far as experiments go, it’s an interesting one as they’ve essentially taken one sour style ale and presenting it four different ways: unbastardised, hopped, berried and fruited.

The logical starting point on the tasting trip is the unadulterated Berliner Weisse, which dishes up lots of lemon character that combines well with a sharp, lactic acidity, rendering it tart and refreshing. At just 3.5 percent ABV, it’s a clean and finely balanced beer, proof you don’t actually need to add any extra ingredients to this style to get a heck of a lot of enjoyment out of it. That said, there’s plenty more fun to be had by spinning the arrow around this colourful carousel.

If chance next turns you towards the Sour Blonde, you’ll be met with something that could be described, in very broad terms, as a souped up version of the Berliner. It features the same balanced and refreshing nature but the dials for tartness and citrus feel like they’ve been turned up considerably, a rasping acidity offset a little by a touch more tropical fruit character from the higher hopping regime. This is the kind of beer you ought not to go into looking for layers. It’s simple, sour and satisfying.

Then there’s the Tropical Sour, a beer that’s about as close as you could reasonably hope to get to straight-up fruit juice. They threw mango, passionfruit and paw paw into the beer and, boy, can you tell. The mango is the dominant player at first, the paw paw comes later in tandem with a satisfying stream of acidity while the passionfruit is far subtler, but that’s to no detriment. It feels like no exaggeration to say they could sell this not by the pint but by the bucket, such is it’s easy-drinking nature. Fans of New England IPAs ought to find this to their liking, not least because it gives you the requisite juice kick in a relatively paltry 4 percent ABV package.

The final and most visually striking of the quartet is the Raspberry Sour. They used an awful lot of raspberries in here and it shows, the refreshing tart berry character making its presence as obvious on the palate as it is in the beer’s lush pink colour. There’s an eminently pleasurable sherbet quality to this beer, one that may prompt reminiscences of trips to spend your pocket money at the candy store as a kid. In short: it’s yum, and a lot of fun. Indeed, the whole pack is.