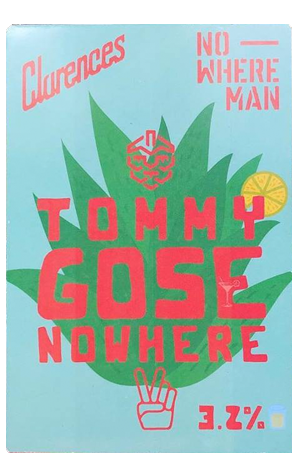 Kicking off Nowhereman’s small bar series, Tommy Gose Nowhere brings out the tropical heart of their Mt Lawley collaborators with a sessionable riff on the Tommy’s Margarita. For the uninitiated, the International Bartenders Association describes Tommy’s as a New Era iteration of the classic margarita, one that replaces orange liqueur with agave syrup. In this case, agave liqueur was used to season the beer, with lime peel and juice completing the homage.

Pouring a hazy, magic-hour sunshine in the glass, the lime addition comes across more fruity than tart, the salt adds to the body and the clean finish deserves a tequila boilermaker companion – Clarences recommended pairing with a lowland Blanco. As far as sessionable refreshment goes, this certainly delivers at a very responsible 3.2 percent ABV, not that its mid-strength weight reined in brewday antics, which culminated in the bar team receiving matching cocktail tattoos.

Available from the brewery and Clarences