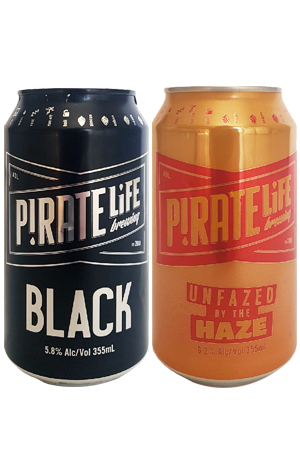 Considering Pirate Life made such a name for itself in such a short space of time on the back of its brewers' mastery of hop forward beers, it might come as some surprise the Adelaide operation has taken so long to put out a New England IPA in a can. But fear not, that’s all changed with the national release of Unfazed By The Haze – well, sort of...

While the beer debuted on tap at their third birthday celebrations may have the smooth body, low bitterness and hopping regime of a typical NEIPA, it’s missing one important element: the haze. Instead, the beer pours clear with the brewery decided to name the beer a New Holland IPA, in reference to one of Australia’s former titles. In every other regard, the beer still delivers much of what fans of hazy IPAs have come to expect. Oats create a smooth mouthfeel while the combination of Mosaic (can a beer be a Pirate Life beer without Mosaic?), Enigma and Kiwi hop Kohatu serves up a tropical fruit bowl that marries mango, citrus and gooseberry then combines them with a piney finish.

Joining the hazeless one is a second new can, with Black covered head to toe in darkness. The beer mixes US hops Simcoe, Mosaic and Centennial with Kiwi Nelson Sauvin, placing it truly at the edge of being a Black IPA. Flavour wise, there’s roasted coffee and a sizeable bitterness that’s put to work alongside citrus, stone fruit, herbal and liquorice.