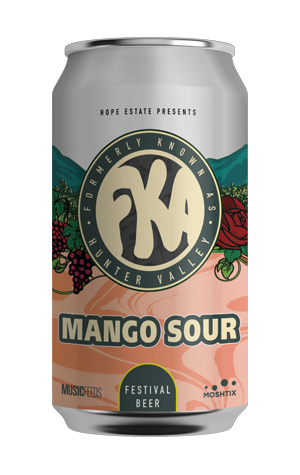 Hope Brewery was born of a desire to create a mid-strength to sate the thirsty masses gathering for the huge concerts held in the grounds of Hope Estate in the Hunter Valley. Now, five years on from the launch of that lager, and with scores of other beers having left the brewery and a few awards heading the other way, they've created another mid-strength for a music festival on the site. But this time it's their own.

The beer, which will be pouring alongside that mid-strength lager at FKA in October 2018, is also a form of flyer for the festival – released two months out from the event, it has details of the festival on the cans. As for the flavour of this flyer, it couldn't be further from the cardboard characteristics of the industrial lagers that traditionally dominate major music events. Indeed, it couldn't be much further from what most Australians understand beer to be.

It's a mango sour, one that's so light in colour it's beyond the pale and that, despite a riesling-esque acidity, carries plenty of fruit sweetness in the shape of not just mango but peach and apple too. According to those we tried it with, it conjured memories of Appletise, Roll-Ups and even Cruisers, which, presumably, is what they had in mind for a festival audience: fun and fruity.

Read our article on the rise of festival beers here.