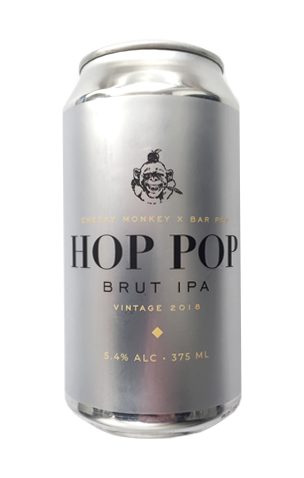 Originally created for the 2018 Perth Craft Beer Fest, Cheeky Monkey and festival organisers Bar Pop have since given their nouveau IPA collab Hop Pop a wider release. And, although labelled a Brut IPA, this feels leaner in body and, with a lower, festival friendly ABV, arguably presents brutier than most beers of its ilk.

Its dryness has stripped any sweetness from the beer and, perhaps unintentionally, moderated the fruit forward characters provided by the Citra and El Dorado hops. As a result, melon, ripe nectarine peel and citrus run a distant second to the beer's distinguished jowl sucking action. Maybe this explains why it found so much favour at the recent beer festival. Either way, Hop Pop hit WA retailers at the start of September and was due to arrive in limited volumes in Queensland and Victoria soon after.