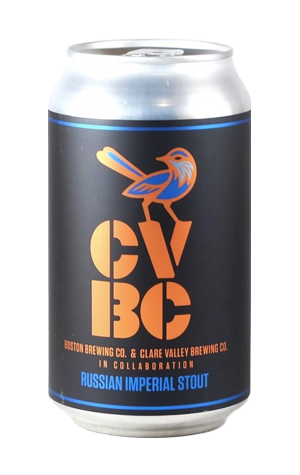 Before the 2018 winter beer festival season kicked off in Adelaide, Clare Valley teamed up with WA’s Boston Brewing on a two-way deal. On the first leg, the Clare team flew west to brew a Guava Berliner Weisse, a 4.2 percent ABV drop featuring a generous amount of guava pulp atop a simple and light malt bill designed to let the fruit shine through. The return trip saw Boston's brewers head to the Clare Valley to create a 7.7 percent ABV stout.

The Russian Imperial Stout pours an intense shade of jet black upon which a rich, creamy, dark chocolate head forms from tight knit bubbles that cling to the glass. The aroma offers undertones of strong coffee and roast alongside heaps of chocolate, while the mouthfeel, again awash with coffee and chocolate, is reminiscent of motor oil. Any sweetness is swept away by the beer's solid, roasted bitterness with the booze nowhere to be seen in a beer that delivers a slick balance of myriad flavours and aromas.

The Guava Berliner Weisse catches the drinker’s attention from the off, as the guava combines with the impact of the kettle souring to create a lively sherbet aroma with lashings of fruit throughout. Zingy lemon and sherbet flavours explode on the palate, while the sourness is pretty potent without drifting into puckering territory.