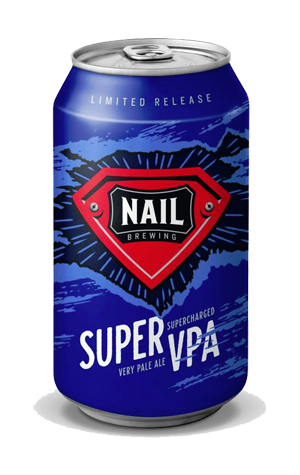 Not all heroes wear capes and, if this one did, the first four-pack would likely ruin a million dollar canning line in minutes. One imagines the canning team quoting Edna from The Incredibles: “No capes!”

Sartorial flair aside, there will be many salivating at the return of Super VPA, Nail's souped up VPA, in packaged form for the run into summer. The beer debuted at GABS 2016, born of a very scientific methodology, one that involved testing various combinations of fruit peel by dropping them into a glass of fresh VPA, Nail’s best-selling beer. They settled on a 70:30 ratio of hand peeled lemon and lime rind and, following its run at GABS, Super VPA has appeared in small quantities ever since, with each batch highly sought after.

Progress is a wonderful thing and, in spring 2018, a fruit peeler was employed to make the day long task of preparing the 100kg fruit addition more appealing. (Sorry…) The El Dorado hop from the VPA puts pineapple front and centre, however, it’s the citrus peel that dominates here, delivery astounding balance and clarity on the palate. As with VPA, drinkability is so high it pays to be cautious; let the record show that The Crafty Pint team offered fair warning.