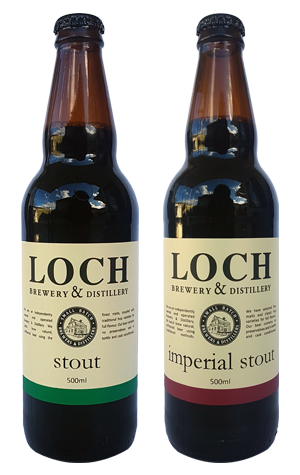 Loch is a brewery and distillery located in the old bank and butchery in the Gippsland village of the same name. The family that runs it has released an Oatmeal Stout in the past and in 2018 added a few other dark beers to the mix. We'll be running a story on the various ways in which they've been combining their two passions – brewing and distilling – soon but, first, two of the more traditional dark beers added to their roster this year...

The Stout is of the dry kind, much lighter on the palate than their Oatmeal Stout, yet still a dark pour with a brown tinge on its fringe. It leans towards the roastier end of the stout flavour spectrum, with roasted barley joined by dark chocolate and espresso. There's also hints of a mint or floral tea and an organic cola like fruity sweetness completing the picture.

The 2018 Imperial Stout is one of those beers that looks fierce in the glass: opaque (as ancient poetry, according to Will Ziebell of this parish) and with one of the deepest, darkest brown heads you'll come across. It's not the most viscous of imperial stouts, despite the visual cues, but is textural enough to leave evidence of its passing. Despite the US hops in the mix, Columbus and Crystal, it's English in nature: all about dark chocolate, sweetened espresso, prunes and raisins.