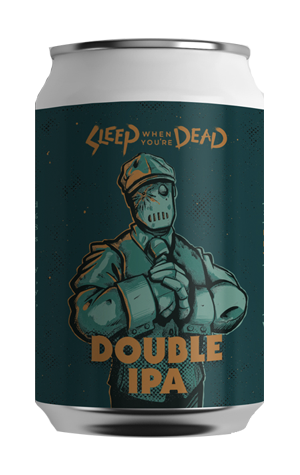 You’ve heard of punchy IPAs. Prepare to meet the punchiest.

This entry in Ballistic’s "Sleep When You’re Dead" series – 100 percent cold shipped, hoppy beers with an eight week Dead By date, which you can read about here – is an 8.3 percent ABV double IPA, armed with Columbus, Simcoe and Citra hops. The artwork on the label is of a robot outfitted as a London gangster, Peaky Blinders style, rubbing its fist to show it’s ready to brawl with anyone who dares accept the challenge. It’s an apt illustration, because this beer is lurking in the shadows, waiting to wallop anyone who drinks it.

The aroma offers up citrus, pine and a little mango on the nose but, when the actual sipping begins, you see what it’s hiding – hard-hitting resin, with the 100 IBU landing a bitterness on the palate more intense than the bloody mouth you'd get from a swift right hook.

Roll up your sleeves, IPA fans. You’re in for a fight.