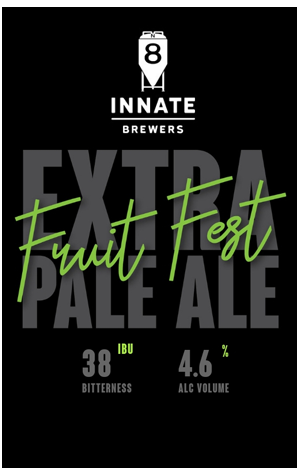 Over the past 18 months or so, the XPA style has evolved from a broad collection of beers that weren’t quite pale ales or IPAs into a more defined style, in part thanks to the dominance of certain Queensland brewery’s example. Even within this more myopic field, Innate has decided to prove there's still room for a slightly different take that will appease punters' general understanding of a lean but fruity beer that probably has its origins in the seemingly long forgotten golden ale.

Here the Saccharomyces Bruxellenis Trois yeast strain does the tropical heavy lifting rather than a monsoon of New World hops. The strain is known for its Brettanomyces like qualities, however it presents no infection risk for the brewery. Instead, this lean bodied beer is awash with the flavours of tropical fruit punch – orange, mango, passionfruit, pear and pineapple. The hungry yeast also has a habit of consuming any remaining sugar, even at 2 degrees celsius, which has rendered this XPA incredibly dry and with a pleasant acidity.

If throwing more confusion at a style that may well be coalescing by using a quirky yeast strain wasn't enough, brewer Joel Nash describes his Fruit Fest as a “crushable, quirky summer ale”. Whatever it is, it's a hard statement with which to argue.