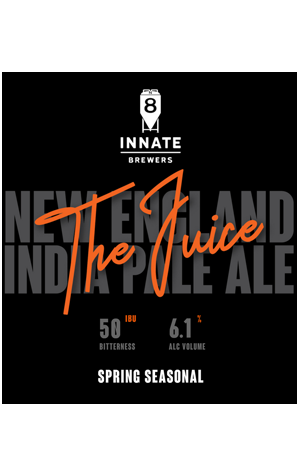 The continuing onslaught of New England style IPAs suggests they may have a place in the future of beer styles. As they began to appear with greater regularity over the past couple of years, there were many keen to deride them, however brewers have found that, to brew one well, they can be a far more technically challenging proposition than a sideways glance at the turbid contents of a glass might suggest. Indeed, Innate’s head brewer Joel Nash has been tinkering with the style for more than a year, in this full booze form and as a mid-strength, and only recently has he given The Juice his full approval. That said, ever the critic, there’s likely another iteration to come.

With this Juice release, Galaxy and Citra hops create a mango led fiesta supported by citrus, notably grapefruit peel, and a firmer than expected bitterness. Mouthfeel is rounded, thanks to the inclusion of wheat and oats, but not milkshake thick. This ultimately makes for a more drinkable beer, one you may wish to adorn with a tropical cocktail umbrella.