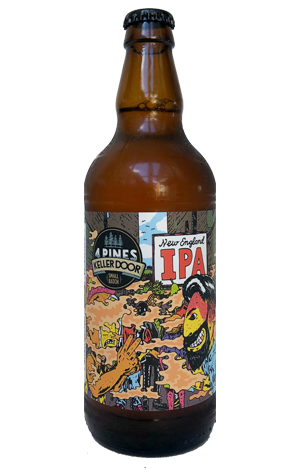 The brewers at 4 Pines have released more than their fair share of IPAs over the years, many of them as part of the limited run Keller Door series. Red Rye IPA, Imperial IPA, Citrus IPA, New Season IPA and on it goes. They've also put out the odd draught only beer bearing the name New England IPA and now such a beer has been given a wider release in 500ml bottles.

They used big-hitting hop varieties Citra, Mosaic, El Dorado, Idaho #7 and Simcoe from the US in what they say is "their most heavily hopped beer ever". For all that, it's not the punchiest of hop forward beers we've had from the Manly brewer over the years nor, despite the orange clouds on the label, the haziest of NEIPAs. While there's a little more haze than you find in 4 Pines' typically bright as anything IPAs, it's closer to clear than murky, with the aromas and flavours – juicy fruit gum with a side of apricot and pawpaw – relatively gentle in nature too.

There's a bit of prickle from the 7.5 percent ABV booze while, with the bitterness kept low as per the style – the tattooed hand flicking the Vs on the label let's you know what to expect – it's pretty gentle on that front too. Judged as a NEIPA, expect it to draw some flack online; as an easy-drinking IPA, however, it's another to add to 4 Pines' cast of thousands.