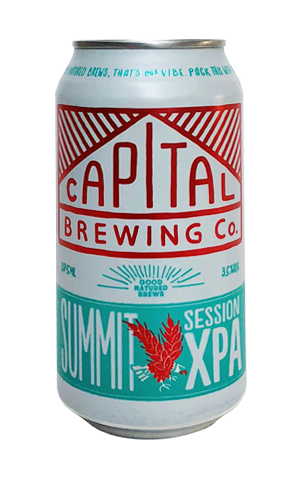 The Summit XPA from Capital Brewing has been around a fair while, at least relative to the brewery's still short existence. Initially a draught only pour, a short run was canned last summer exclusively for the Secret Garden Festival. Its popularity means it's now graduated to the brewery's core offering in time for summer 2018/19.

While it may bear the name XPA, which as a category locally seems to be gravitating towards pale, light-bodied, hop forward pale ales around the 4.5 percent ABV mark, this is actually a "session XPA" weighing in at mid-strength weight. Thus, it's a little lighter again on the palate than many XPAs around, but in other respects delivers what you'd expect: a pale yellow, hazy pour with peachy, passionfruit hop characters, only the barest of malt sweetness and a faintly resinous bitterness rounding things off.

Given how easily a tinnie can be drained, perhaps it's as well it is only a mid-strength...