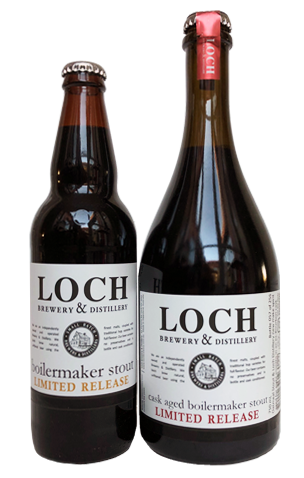 It takes something to stand out from the crowd in the ever-busier local beer world, but Craig and Mel at Loch Brewery & Distillery in South Gippsland manage to. Not only do they brew English style beers and produce gins, gin liqueur and whiskies but they've been blending their various wares too.

These two Boilermaker variants – of which you can read much more here – are, in many ways, a summation of their story. Both take their stouts and add a portion of the new-make malt spirit with which they produce their whiskies. In the case of the Boilermaker Stout, that's the end of the process; with the Cask Aged version, the liquid – it's not a beer but a spirit under ATO rules – is then aged for eight months in former bourbon barrels, rising to 14.2 percent ABV in this version.

It's rare to get to taste new-make malt spirit; typically you'll be handed it within a cocktail or not experience it until it's spent years in barrels becoming whisky. In both these releases, you can both smell and taste it as it adds a perfume like alcohol character, without contributing anything harsh or hot. The straight Boilermaker Stout retains something of the original beer's dryness and is light on its feet too. Meanwhile, joining the spirituous character in the Cask Aged version is a hefty portion of rich chocolate. As ways to tell the story of your business, they're can't be many better.