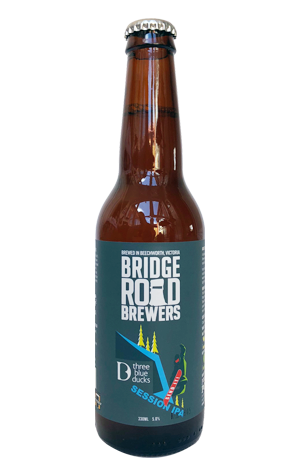 It's funny how these things work. You don't see many sour 'n' smoky Lichtenhainer style beers around then two land from Victorian brewers in a couple of weeks. And now we've had two sessionably minded releases come our way in quick succession bearing the name Send It. However, while Black Hops' "Gold Coast inspired session ale" looks to keep things simple, there's a bit more to cover here.

For one, it's the second release in Bridge Road's Restaurant Series of hookups with, you've guessed it, restaurants, in this case the multi-venue, multi-state operation Three Blue Duck; number one was with Movida for those keeping count. And, while it's labelled as a session IPA, it's one that comes dosed up with lashings of Panama Gold passionfruit grown close to one of the Three Blue Ducks venues in Byron Bay.

The fruit addition takes the beer a step (or should that be piste) or two away from session IPA territory, adding a tang that encroaches into the sort of territory occupied by kettle sours, as well as delivering a deep, almost bergamot like citrus quality to the beer. There's a touch of saltiness to the hazy copper drop too, not to mention a reasonably punchy bitterness, making for a beer with more going on than you might expect.