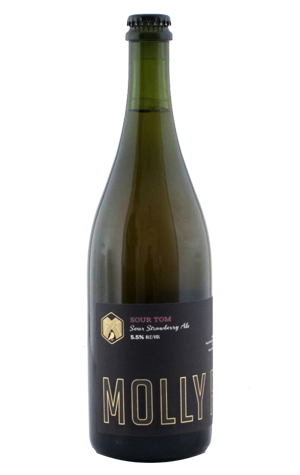 Sour Tom was one of the opening trio of beers in Molly Rose's Foundation Series and has gone on to make follow up appearances. Going back a step further, it started out as a happy accident in the brewery that led to some wasted grain that needed using somehow. Into the mix came a heap of strawberries and Sour Tom was born. And, if we go a step further back again, its name comes from one of brewery founder Nic's mates, Tom O'Reilly, now making mead under the Sunlight Liquor banner and, we're told, not at all sour but rather a great friend.

Anyway, the beer to which he's lent his name is one that comes with a soft pink edge to its otherwise pale golden hue and serves up a platter of freshly sliced strawberries on the nose. Platter might not be the right word, however, as it's more a case of freshly sliced strawberries presented atop a hay-strewn strip of oak ripped from an old wine barrel, which adds its own vinous and gently funky farmhouse characters to the liquid in your glass.