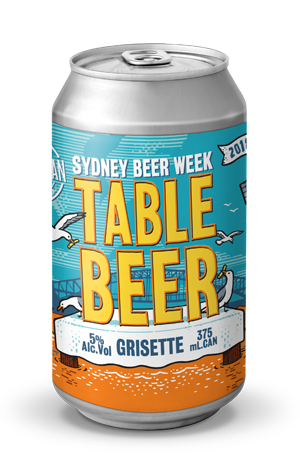 Ahead of the opening of festivities, the official Sydney Beer Week beer has been shipped out to the venues preparing to unleash a torrent of good feels and great times at events across the city. For 2018, the festival beer was brewed by the team at Rouse Hill's Australian Brewery in collaboration with the festival’s general manager Liam Pereira. And, for the first time, it’s been packaged in cans, wrapped in the kind of colourful artwork that characterises the festival program – of which more here.

The big block lettering tells you it’s called Table Beer but, at five percent ABV, you could argue it’s a touch too high to actually be a traditional table beer. In any case, the subtext tells you what it actually is: a grisette, a relatively obscure Belgian style most drinkers would probably feel quite comfortable lumping under a broader saison label.

It’s an interesting choice for a festival beer, if only because it would be much easier to make, say, a pale ale that you know pretty much everyone will drink without fuss at any venue and quite likely enjoy. But, given one of the roles of the festival is to introduce people to new flavours and experiences, it makes sense to use the banner of the festival beer to do just that.

On the nose there’s a pleasant pinch of pepper and spice, particularly clove, from the yeast. They’ve tapped into an experimental hop variety – the as yet unnamed HPA-016 from Hop Products Australia – which adds a broad citrus zest character. There’s also a degree of grittiness that pairs quite nicely with the yeast elements, a mandarin-like bitterness and a dry finish. It’s a beer that’s perfectly good on its own but, as with so many beers of its ilk, really comes into its own when paired with food where the matching combinations are many and varied. Just as well since it’s set to feature on a lot of tables in the coming week.