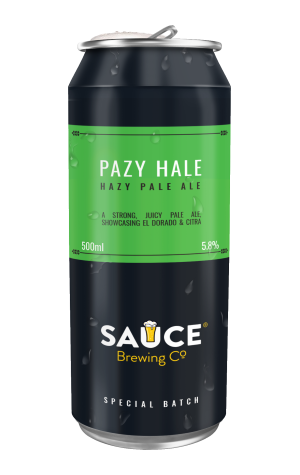 Ever since Sauce decided to try wading into murky waters by brewing the Bubble & Squeak New England IPA, the brewers have been afflicted by the haze craze. They’ve taken the burgeoning trend to heart and fine tuned their recipe to the point where it’s become one of the brewery's most popular releases and, arguably, their signature beer. So it all seemed very reasonable when they chose to release a fruitier and boozier cousin to that beer in the form of the Trubble & Squeak imperial NEIPA. Now they’ve gone the other way with a slightly less fruity and boozy sibling.

Pazy Hale is a deliberately tongue-tying take on a hazy pale ale. In many ways it’s similar to the Bubble & Squeak (certainly far closer than Trubble was to Bubble) in the manner with which it serves up its bright tropical aroma and free flowing flavours of stone fruit, pineapple, mango and more. The main difference is that, at 5.8 percent ABV, it’s close to a full percentage point in ABV lower. That, at least in part, is one of the reasons it doesn’t feel as full in body when compared with Bubble, though that’s perhaps more an exercise in splitting hairs for the sake of doing so given the beers, while similar, are designed with that point of difference in mind.