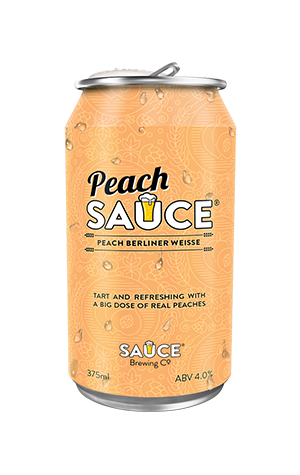 There’s only so long you can keep brewing a one-off batch with such regularity that you have to accept that you might as well make it part of your core range. It took the folks at Sauce about ten months to get there but they did get there when they announced that Peach Sauce had officially joined the team. Now, it’s not exactly the same beer as the one they first launched in January 2018 under the name Son Of A Peach and which has gone through a few iterations in keg and can, but it is a completely natural progression.

One of the good things about making a beer a bunch of times is that you get to figure out exactly where you want it to go and what you want it to be. With that, the main difference between the first Son Of A Peach and the now-permanent Peach Sauce is that they wanted to bring down the alcohol level, shifting it from five-and-a-bit percent ABV to an even four percent ABV and thus to be truer to style as far as the Berliner weisse element of the beer is concerned. Slightly less true to style is the addition of peaches, which they wanted to ramp up and have duly done.

What you have with Peach Sauce is a beer that’s a long way from the thick saccharine can-of-peach syrup the name might conjure up. Instead it’s lean, relatively light in nature and altogether approachable. The sharpness of the acidity marries up well with the fruit flavour, making it flavoursome but refreshing and dry.