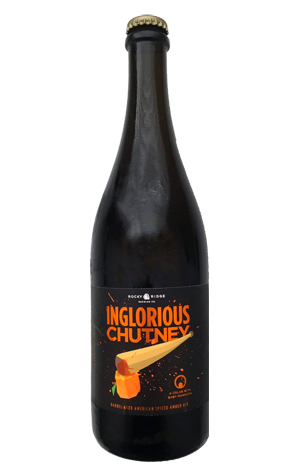 It’s one thing to be creative and it’s another to make a chutney beer aged on apricots for six months in ex-chardonnay barrels. It’s also quite another to launch said chutney beer as the only liquid pairing for a six-course degustation but the Baby Mammoth team wouldn’t have any other way.

Just to add to the collaborative creativity, when the dinner took place, each course included ingredients foraged from Rocky Ridge’s farm. To be clear, Inglorious Chutney is something unique – a food beer not a beer to match with food.

Pouring a light rusty amber with a tight, crisp white head, there is little to indicate what is to come. Tasting shows that interesting ideas have been expressed with technique, for what could have been a flavour train wreck is an integrated, elegant and curiously drinkable beer with minimal sweetness. Of the additions, ginger arrives first, closely followed by cinnamon and a wave of non-distinct but warming spice, none of which ever feels out of balance. Peach and apricot with a background of spiced, mulled orange character are close behind. Barrel tannins rise through the dry finish, adding to the slightly tongue-numbing boozy prickle.

For those that don’t know which end of the mixing spoon to hold, Hamish Coates from Rocky Ridge recommends enjoying Inglorious Chutney with a variety of cheese, charcuterie and pickles. The more adventurous could ask Ryan or Tania Lambson over the bar at Baby Mammoth.